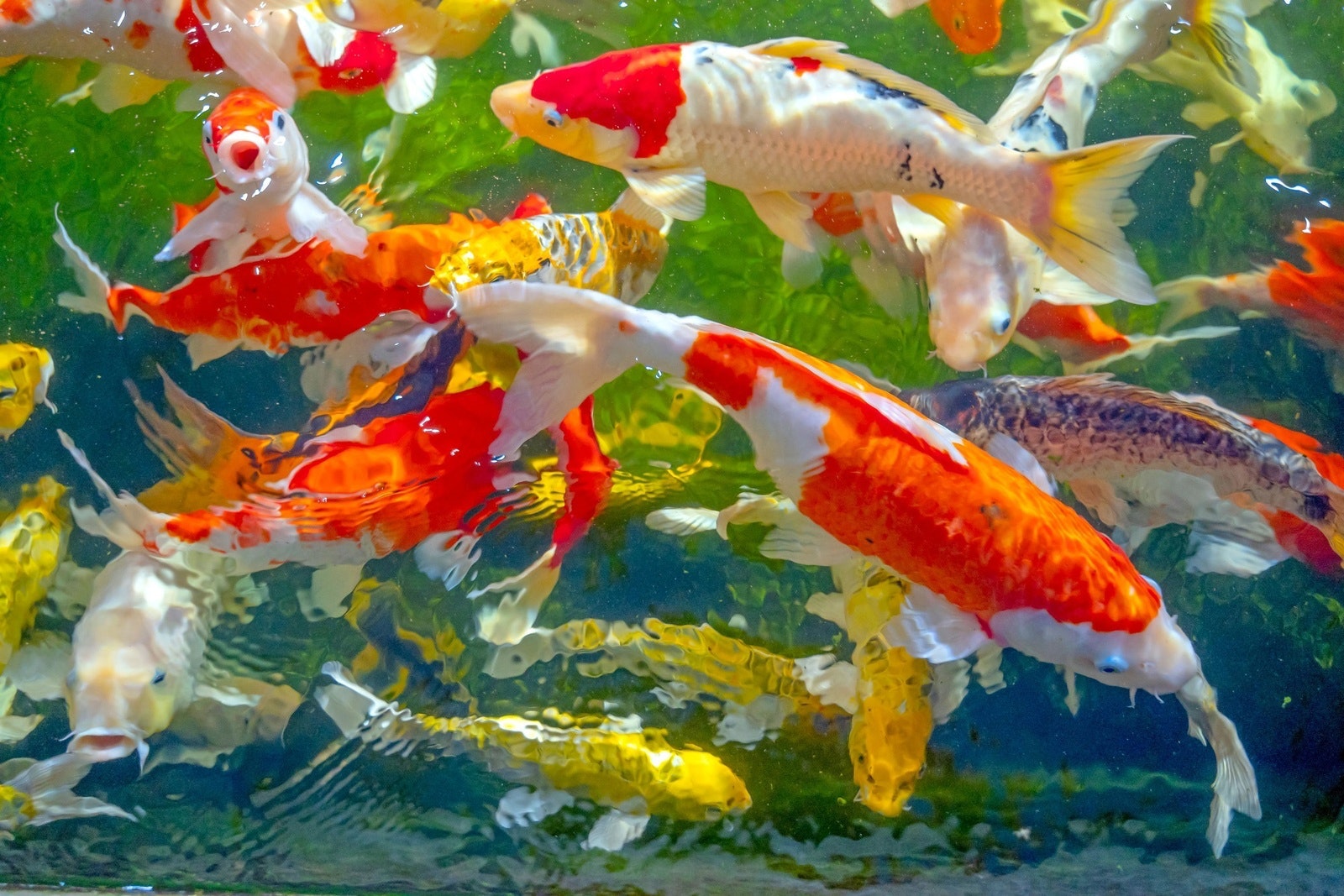 Koi Carp: Loved by the Japanese Since Long Ago

Koi are aquarium fish with a long history. Historical records show koi being used as the inspiration for painting patterns of items exhibited at expos during the Taisho Period (1912～1926).
They are actually an invasive species to Japan. The specially bred fish have been bred into many different varieties.

Koi are kept as aquarium fish in aquariums and ponds within Japanese gardens. Their characteristics are their beautiful patterns and striking colors. The average size of these fish is between 30 and 60 cm and their life span is around 30 years.
Let’s take a look at why these fish are so attractive.
The video shows you a koi farm and a competition that you don’t get an opportunity to see often.
Be sure to check it out while reading this article.

Koi were originally called "irogoi" (色鯉, colored carp), hanagoi (花鯉, flower carp), and "moyougoi" (模様鯉, patterned carp) in Japanese.
They started to be called Nishikigoi (錦鯉, brocade carp) because of their luxurious designs reminiscent of a brocade.
The Japanese brocade shown at 0:14 in the documentary video is a Japanese traditional silk fabric made by weaving variously colored threads.

Koi were originally eaten as a food, then, one day, a unique fish with beautiful patterns appeared.
There are many kinds of koi, such as red and white and tri-colored koi with red, white, and black.
In addition to the Taisho Sanshoku (tri-color) and the Showa Sanshoku, there are some unusually colored ones, such as light yellow, autumn Green, tortoise shell patterned koi, reflective koi, five Colored koi, and gold and Peacock koi as well.

How Are Koi Looked After?

It takes a lot of work to raise beautiful Nishikigoi.
The Dainichi Koi Farm in Niigata Prefecture in Japan's Koshinetsu region, farms koi. At the farm, they strictly control water temperature and quality, as well as feeding schedules.
They put great care into raising beautiful koi. They are also very particular about the feed given to their koi.
This can be seen from 1:13 in the video.
From 1:37, you can see many baby koi as well.

Hiroshi Mano from Dainichi Koi Farm says in the interview, "The most important things are maintaining proper water temperature and quality. Beautiful koi are strong, healthy koi.
From 3:27 in the video, you can see the annual National Koi Competition.
Koi from the Dainichi Koi Farm were the winners of this competition.

How to Get Your Very Own Japanese Koi

There are many kinds of koi.
In Japan, many people love koi. Koi with patterns or beautiful colors are sold at auctions for sometimes astronomically high prices.

Furthermore, you can buy specially bred varieties of koi at online shops and Yahoo Japan Auctions, but they usually go for quite a bit of money.
Some orders for Japanese koi come from overseas. The number of koi exported overseas is increasing year by year.
Popular koi have been used as a motifs in traditional Japanese crafts as well.
We recommend buying plates and chopstick holders with koi pattern designs.

In Japan, there are many kinds of aquarium fish, such as goldfish and Japanese rice fish. Among them, koi are loved by many people for their jewel-like beauty.
Koi are born around Niigata Prefecture area.

You can learn the history and the characteristics of koi at Nishikigoi no Sato in Niigata, the birthplace of koi, and at Fukuoka Koinosato Park in Fukuoka-machi, Toyama Prefecture in Japan's Hokuriku region, which is one of Japan’s most famous koi production towns.
If you have a large landscape garden or a large aquarium and would like some koi of your own, try searching online or try out some auction sites to see if they have what you're looking for.

You can see many koi with beautiful patterns in the video.
Be sure to check out the video to enjoy the beauty of Japan's "swimming jewels."