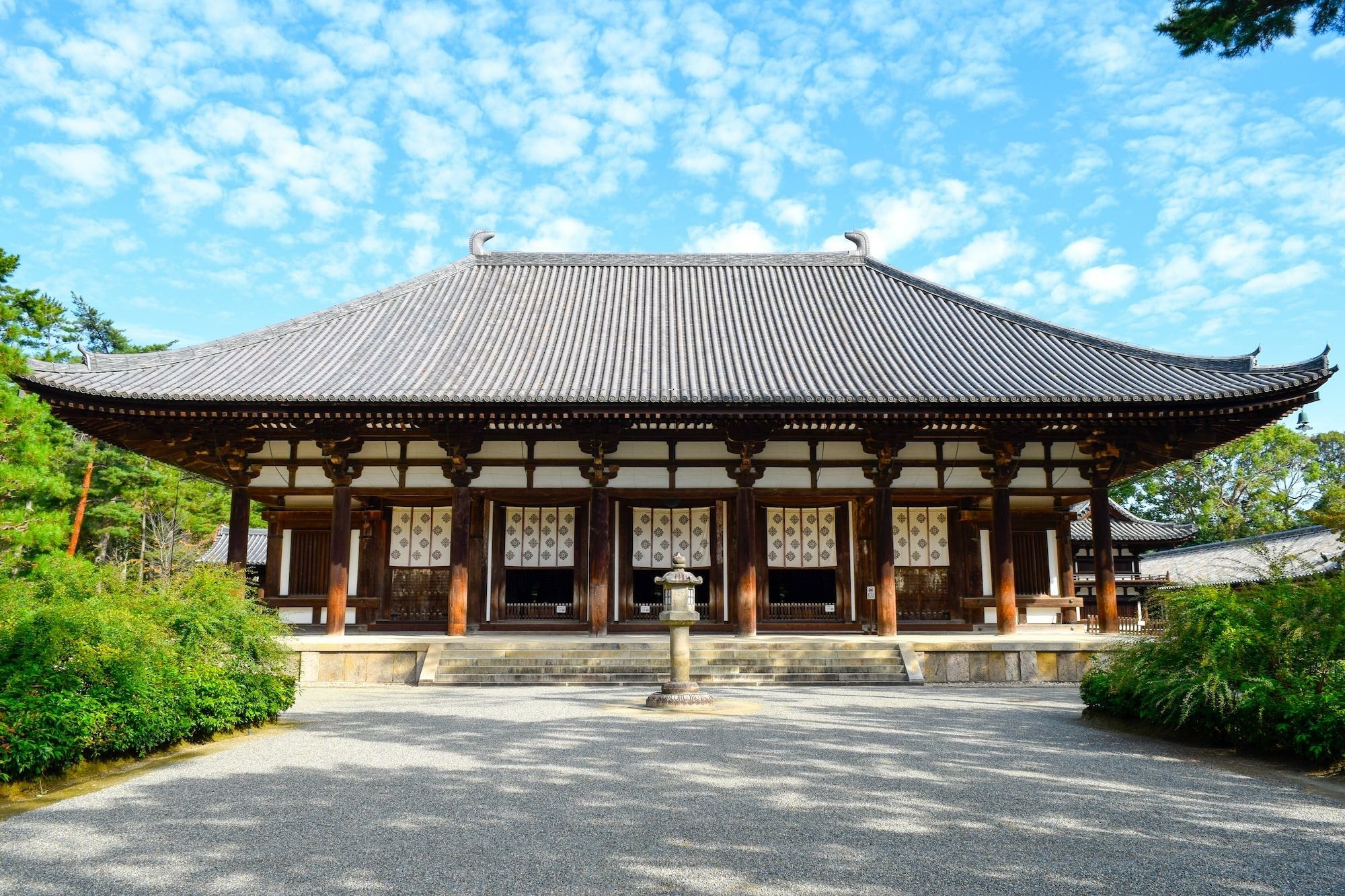 Toshodaiji Temple is located in Gojo, Nara in Nara Prefecture, in Japan's Kansai region. It's an ancient temple with 1,300 years of history, founded by Ganjin (Jianzhen) in 759, and is the head temple of the Risshu sect of Buddhism, one of the Six Schools of Nara Buddhism.
There are many buildings on the temple grounds that are National Treasures and Important Cultural Properties that showcase the Tenpyo culture (the culture of Buddhism in Nara at the time), and Toshodaiji Temple has been designated as a World Heritage Site.

Ganjin, who built Toshodaiji Temple, was a high priest during China's Tang Dynasty. During the Nara Period (710-794 A.D.), he finally made his way to Japan after five unsuccessful attempts to travel there over a period of about 11 years, and after much hardship. When he came to Japan, Ganjin was already 66 years of age.

He spent the first five years of his life in Japan at Todaiji Temple, where he established the precepts as the founder of the Risshu sect in Japan. He then opened a training center for those who would study the precepts. Later, many buildings, such as Kondo (金堂, lit. "Golden Hall"), were constructed by followers of Ganjin at this training center, and it became Toshodaiji Temple.

In the Mieido Hall on the temple grounds, there is a seated statue of Ganjin (a National Treasure), and the doors are opened to the public in June for a special viewing each year. The stunning wall paintings completed by Kaii Higashiyama over a period of 10 years are also open to the public simultaneously.

The Main Hall of Toshodaiji Temple

Kondo, the main hall located beyond Nandai-mon, the southern gate, is a representative building of Toshodaiji Temple that preserves the large wooden architecture of the Buddhist temple buildings of Japan's Nara period. In the center of the main hall is a seated statue of Vairocana that stand over 3 meters high, and to the right is a standing statue of Bhaisajyaguru, and to the left is a standing statue of the thousand-armed Kannon (all National Treasures).

In the video, you can see the powerful and majestic Kondo Hall.
[Video] 1:13 - Toshodaiji Temple's Kondo Hall

Points of Interest at Toshodaiji Temple

Toshodaiji Temple, a World Heritage site, has many precious temple buildings, and you can take photos lined with National Treasures to post on Instagram or simply keep as mementos of your trip.

When you visit Toshodaiji Temple, you'll first see Nandai-mon (the south gate), and Kondo Hall (Golden Hall, the main hall) can be seen beyond it. Located between the main hall and the lecture hall is the two-story Kodo Hall (lecture hall). Next to the ordination platform, where stone steps have been preserved from Japan's Kamakura period (circa 1185-1333 A.D.), is the lotus pond said to have been introduced by Ganjin, the aforementioned Mieido Hall, and the sutra house and treasury on stilts.

The auditorium where the statue of the Maitreya Buddha is enshrined can be seen here.
[Video] 6:42 - Kodo Hall

Various events are held throughout the year at Toshodaiji Temple. One of the most well-known is Uchiwa-Maki, in which hundreds of uchiwa (Japanese fans) are thrown from the temple tower. Receiving an uchiwa fan is said to bring good luck in warding off illnesses and evil spirits.
Every year, on the anniversary of the death of Ganjin, the fans are scattered from the temple tower. Tickets for Uchi-Maki are distributed on the day of the ceremony.

Did you watch the video showing the solemn charms of Toshodaiji Temple, one of the most famous temples in Japan? Toshodaiji Temple was registered as a World Heritage Site by UNESCO in 1998 as one of Nara's cultural properties. Be sure to visit Toshodaiji Temple, a place of many National Treasures and Important Cultural Properties with much to see and do.