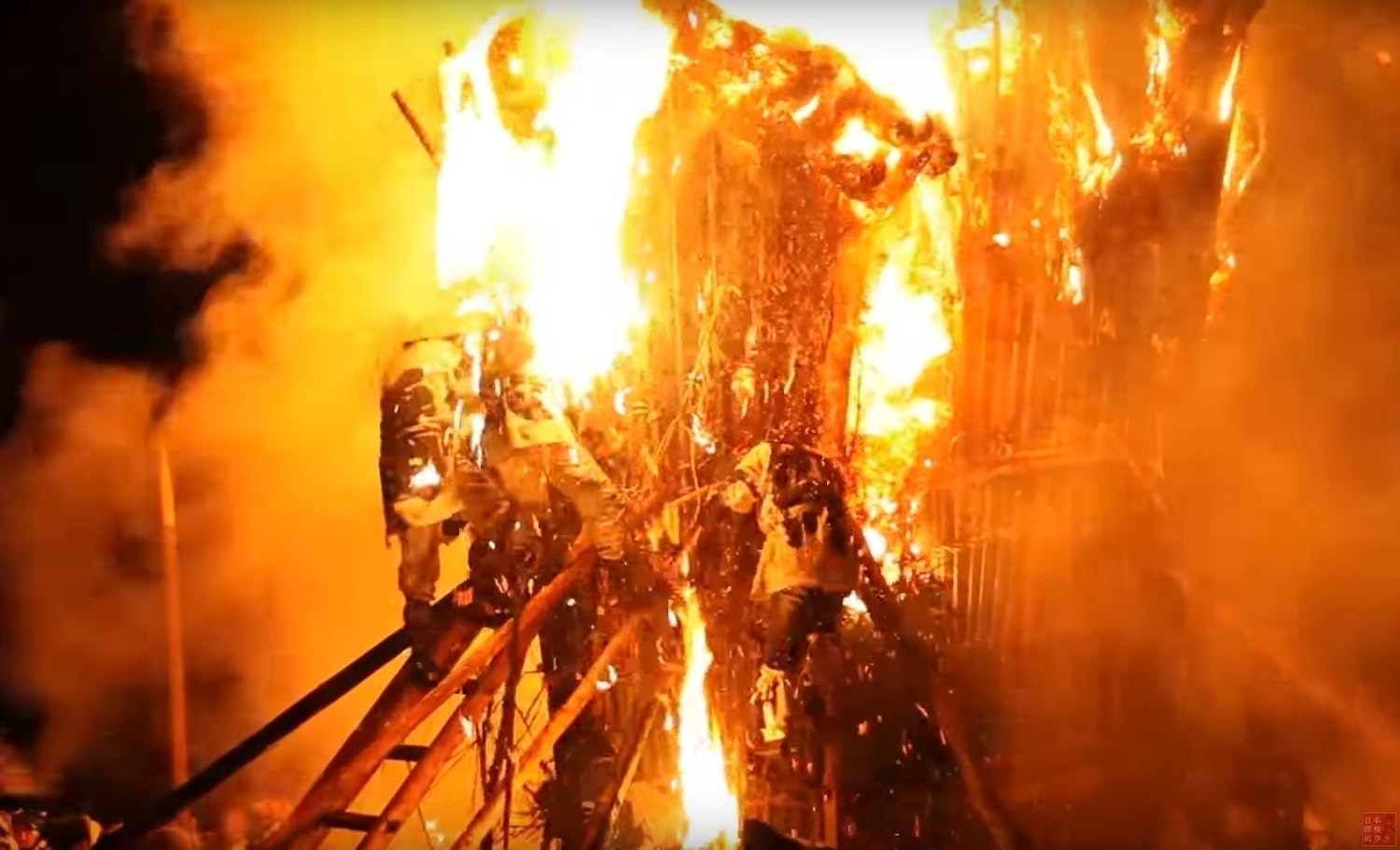 The Toba Fire Festival is a historic festival which is still held to this day at Toba Shinmeisha shrine (鳥羽神明社) in Nishio city (西尾市) in the southern area of Aichi Prefecture (愛知県), located in Japan's Tokai region (東海地方).
The official name of the festival is "Toba Daikagaribi" (鳥羽大篝火, ~The Bonfire of Toba).
The Toba fire festival, which is thought to have originated approximately 1,200 years ago, has been designated an Important Intangible Folk Cultural Property of Japan.

What Kind of Event Is The Toba Fire Festival?

During the Toba festival, area representatives called "Fukuji" (福地) and "Kanji" (乾地) set fire to a gigantic torch called a "Suzumi" (すずみ) which, by the nature of the flames, predicts the following years fortune with regards to weather, harvests, and so on.
The representatives of each area, called "Shinotoko" (神男), must be at least 25 years of age and before the festival begins must live in a shrine, refrain from eating and drinking, and cleanse their bodies with water in a purification ritual.
Also, on the day of the festival, the Shinotoko must jump into the sea naked as part of said purification ritual.
The Shinotoko from the previous year help prepare the current year's Shinotoko during this purification process and teach them how to use the "Yusuribo," a 4-5 meter stick used to hold up the suzumi.

The Toba Festival starts with the Shinotoko setting fire to the 5 meter tall, 2 ton "Suzumi."
After that, the Shinotoko and helpers race to retrieve the "Shinboku" (神木) and "Juninawa" (十二縄) from inside the Suzumi and present them at the shrine.
As you can see in the video, the men, who are dressed in hoods, continually pull down the burning grass to get to the Shinboku and Juninawa.
From 1:23 in the video, you can see the men climb the Suzumi as flaming grass falls down around them.

The men are often called "Neko" (ネコ) which translates to "cat" in English, because of their clothing and the way in which they jump down from the ladders.
It is said that if there is a lot of smoke in the Toba Fire Festival, there will be more rain that year, and if the sound of the bamboo crackling is loud, there will be more thunder.
It is also believed that eating with chopsticks made of the bamboo used in this ceremony will prevent dental problems.

Other highlights of Nishio city include Kira Hot Spring (吉良温泉) and the Nishio City Salt Farm Experience (西尾市塩田体験館).
The island "Sakushima" (佐久島) is also a popular spot for enjoying contemporary art.
If you're planning a trip to Nishio city, we also recommend trying some of the popular local sweets made with Matcha.

Summary of the Toba Fire Festival

The Toba Fire Festival has been featured in the local Aichi news outlet "KATCH" (キャッチ), as well as other websites and tourist information brochures.
For those interested in traditional Japanese festivals, we highly recommend taking another look at the video of the Toba Fire Festival!
On the day of the festival, many food stands and special viewing areas are set up as well, so be sure to head over to Nishio and enjoy the awesome Toba Fire Festival!