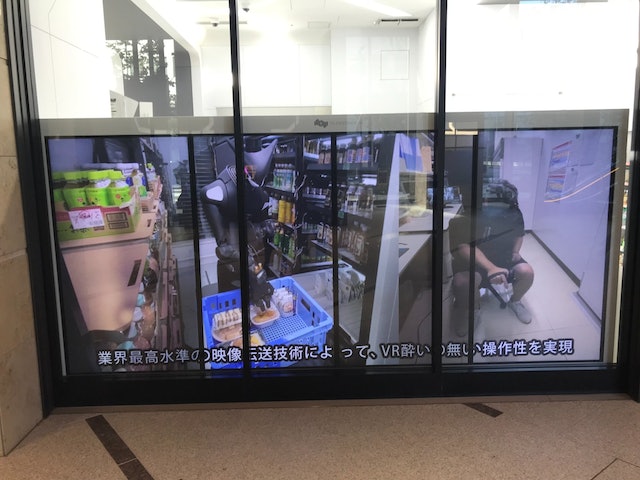 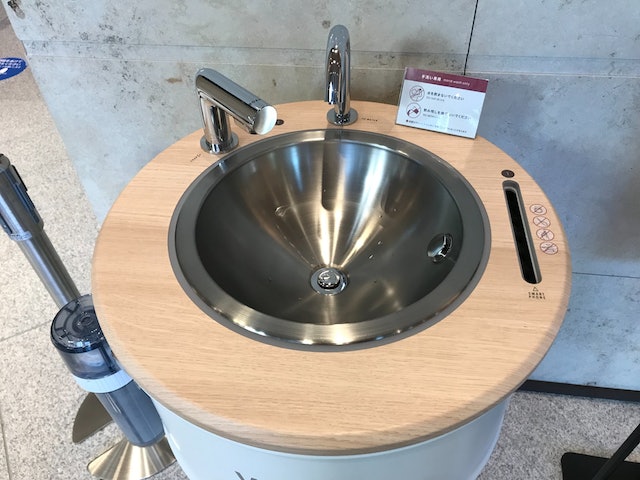 Went to Takeshiba over the weekend and visited "Tokyo Portcity Takeshiba"

I was in the area for other reasons, but just happened to stop by because the building looked interesting. Turns out I was right!

The inside of the building had a bunch of really nice shops and was showing a futuristic VR robot being used to stock shelves in a convenience store. I didn't stick around to read everything that was being shown on the screen but this photo seems to be saying how they've created a VR system where users won't feel VR sickness, which I'd actually not heard about before, but it seems to happen after long periods of VR use and is similar to motion sickness I guess.

The other photo looks like a simple picture of a sink but it actually has another really cool futuristic feature.

The little slot on the right can actually disinfect your phone using UV.
I couldn't take a photo of the actual process since I only had one phone but I tried it out and it was really neat.
You just remove your case or anything else you have attached to your phone and pop it in and wash your hands.
Takes like 30 seconds, about how long it should take to wash your hands, so it's a really convenient feature.

Cool place though, I definitely recommend paying it a visit!

0 Comment(s)
Highest Rating
VIEW OTHER COMMENTS
SHOW MORE
Comment Top
Next post
Dec. 28, 2021
Like I mentioned yesterday, I went to "Tokyo Portcity Takeshiba" over the weekend and there were a ton of restaurants. The one that I chose to eat at was a tough choice, but I ultimately settled on "Do Miso Tokyo Portcity Takeshiba" (ど・みそ 東京ポートシティ竹芝店), but there was also an Okinawan-themed restaurant right next to it called "Okinawa Bar Kafu" (沖縄酒場 かふー) that looked really nice as well, and smelled good. Either way from across the isle I got to eat some delicious ramen while listening to the Okinawan music which was really relaxing and created a nice atmosphere. I'm not sure what the ramen I got was called it was just the normal miso ramen from my understanding and I believe it cost ¥1100. There's another one that looks similar, has a similar name, and costs ¥1200 but that's a white miso ramen and not the one that I got. Either way, I'm sure it tastes good as well, because my ramen tasted great! I really liked that the restaurant had metal cups as well, it gives the water a different flavor and always makes it feel more refreshing too (in my opinion at least). One thing I forgot to mention about the building; if you open up their website, another futuristic feature you'll find is that the building actually shows the number of people in the building at any one time and also shows that percentage of male and female visitors. I thought this was really amazing. I'm not sure how it's done, but they must have censors located at the doors or in other places around the building that can analyze body structure or something similar. Either way it's a cool place!

Previous post
Dec. 24, 2021
Went to Ootoya again and ordered something new. The dish used to come with meatballs if I remember correctly but it seems they changed it to fried chicken. Goes much better with the meal in my opinion and the grated radish over the top of it was a nice touch. I also really liked the pumpkin croquettes, I'm used to just normal croquette's (I'm not even sure what they're filled with), but this was a nice change of pace and was kind of refreshing, probably because it felt very healthy lol. As always all of the side items tasted great and it was all only ¥740, so pretty much a steal if you ask me