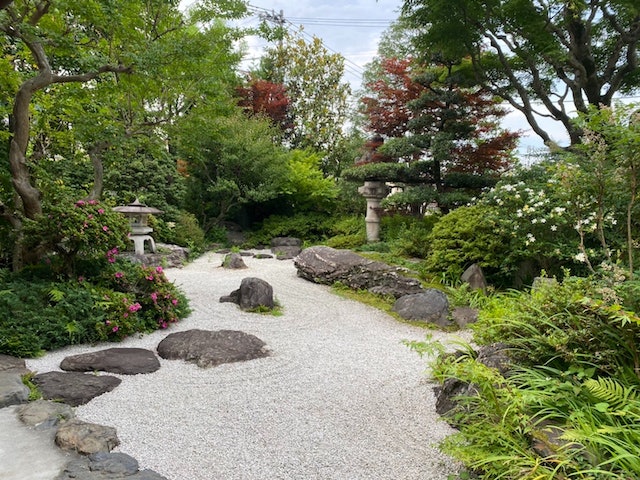 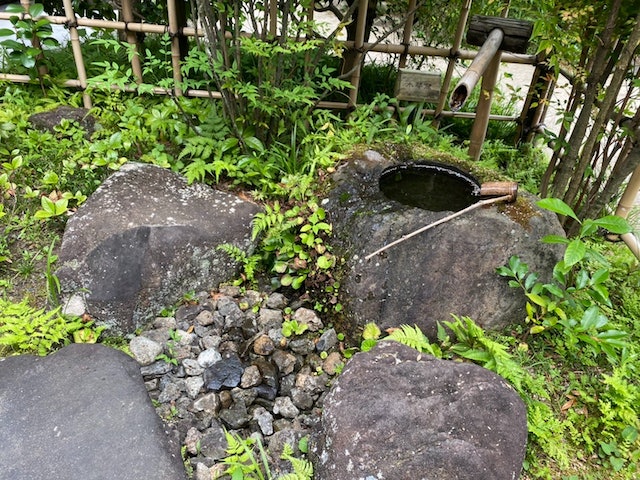 [Englsh／日本語]Continuing from last week, here are some photos from Komagino Garden. The garden was magnificent. There was also a suikinkutsu (a device in which water droplets fall into a hollow created in the ground and reverberate the sound they make), which made a very cool sound. 先週に引き続き、駒木野庭園の写真です。庭園も見事でした。また、水琴窟（地中に作りだした空洞の中に水滴を落下させ、その際に発せられる音を反響させる仕掛け）もあり、とても涼しげな音を奏でていました。

14 days ago
[English／日本語] Tanabata decorations appeared in front of Hachioji station. The strips of paper fluttering in the wind are very cool. We are also holding a Tanabata event at our school. Students write their wishes on tanzaku strips and do origami, and it is a popular event. 八王子の駅前に七夕の飾りが登場。風になびく短冊がとても涼しげです。本校でも七夕イベントを行っています。生徒たちは短冊に願い事を書いたり、折り紙をしたりと人気のあるイベントです。

May. 20, 2022
Wanted to post this earlier this week, but better late than never I suppose. Was walking around Arakawa and they were having a rose festival sort of event it seemed like. Over by Arakawa Amusement Park there was a little area set up with some stalls. I didn't get to check it out but it seemed like there were a lot of people there. The amusement park was also open. I don't think I've seen it open for a while so it was nice to see people are able to visit it again. When I was passing the Arakawa tram I noticed there were tons of roses along the sides of the track that I'd never noticed before so I decided to snap this photo of the pink tram passing by with them.

May. 19, 2022
Great way to enjoy the sakura season. I saw many people spent their day off on pleasure boats and enjoy the view of beautiful parks and garden near the river. At the same time few love to feed birds and fishes. This picture was taken exactly that moment when a pleasure boat was floating near skytree and one family was feeding those seabirds and you can see the blooming sakura in the background too.

May. 16, 2022
Japan has a deep rooted cultural heritage and the ethnicities of this country is versatile and beautiful. When my foreigner friends wore those vibrant and gorgeous kimonos they got so much appreciation from the people around them that was overwhelming. And yes it was also my first hand experience as a photographer too.. On that day we enjoyed a lot.

May. 5, 2022
Had a nice relaxing golden week and to finish it off I saw some carp streamers billowing in the wind at some park along the river near Kita-senju. Had some really nice weather the past couple days too, which was great. Hope everyone had a nice holiday/vacation!

Apr. 25, 2022
Went to Rikugien Gardens over the weekend! The weather was really nice and the flowers were beautiful. I was hoping to see the yukitsuri, but unfortunately they'd already been taken down. We bought some bikes recently so we decided to ride them to the park. It's been really nice to get a bit of a leg workout in instead of riding trains all the time. It was only about 25-30 minutes too and we were able to avoid all of the packed trains and get some fresh air. I was pretty happy that we got to see the popular view from the top of the hill (3rd photo). I've seen many photos of it before and finally was able to see it for myself. I never knew that the park had turtles in the pond either, so that was pretty cool to see. There were a bunch swimming all over the pond, sitting on rocks, etc. We managed to spot a crane as well, but it was in a spot were we couldn't really take a good photo of it so I decided to pass and just admire it without a photo. We stopped for a short break at one of the small cafes inside the park and got a quick snack. I'm not a fan of manju, but my girlfriend likes them so she got a coffee and one sakura manju. She seemed to like it, but decided to take off the flower from the top as she didn't want to eat the petals. The melon soda float was nice too. Definitely a nice place to visit and hoping to visit again in the fall to see the leaves after they've changed color.

Apr. 12, 2022
Found a nice izakaya in Kanda today. The name is Kakuuchi Inagaki (角打 いながき). I think that's the reading for the kanji at least... The place had a really nice atmosphere and some really good food at very reasonable prices. I ordered the Saba no Shioyaki (さばの塩焼き, salt grilled mackerel) and it was really tasty and only cost 750 yen as well. Definitely a nice place to drop by for some after work drinks with a friend or coworker or just for lunch like I did. It seems like they serve nikomi and oden later at night as well, so if you like that I definitely recommend it.

Apr. 11, 2022
[Englsh／日本語] Hachioji City, where our school is located, is a city with a rich history. Here you can experience various traditional cultures. 2 students are holding "Kuruma Dolls". School events also offer experiences that expose students to the culture of Hachioji as well as Japan. 本校がある八王子市は歴史のある街です。ここではいろいろな伝統文化を体験することができます。2人の学生が持っているのは「車人形」です。学校行事では日本だけではなく八王子の文化に触れる体験も行っています。

Apr. 11, 2022
Was nice weather over the weekend so I did a little exploring. Found this nice little temple near the Sumida River called Hozoin Temple (寳蔵院) in Arakawa. I wasn't sure where exactly I was allowed to go inside the temple, and I didn't have much time anyways, so I just took a peak through the gates and snapped a photo. It was a really quaint place and apparently it has some landscape paintings and itabi tablets. From what I saw, it looked like there was a garden across the ground. Maybe a rock garden or something of the sort, I wasn't able to get a good look at it though. The area around the temple was the hunting grounds of the Tokugawa Shogunate as well it seems. Pretty amazing to imagine there was enough greenery in the area to hunt in the past. Also managed to stop by a nice udon/soba restaurant for lunch. It was called Sunaba (砂場) I believe. I ordered the kamo (duck) nanban udon and it tasted great. Haven't had duck in a while, but it's always a treat. The lady taking orders was really nice as well. Overall a great place!