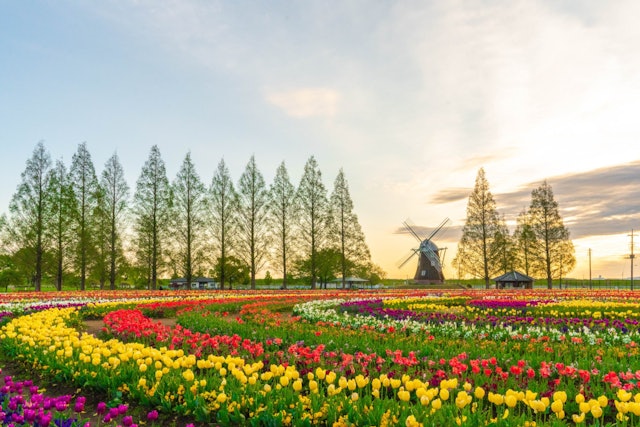 Apr. 4, 2022
【English／日本語】 These are cherry blossoms at Shinshoin, a temple in Nishi-Hachioji. This temple was opened by the daughter of the famous warlord "Shingen Takeda". Unlike ordinary temples, it is very gorgeous with feminine decorations. Our school goes to visit it once a year. Before the visit, students learn in class about the tragic love story for which this temple was built. There are many historical buildings near the school. It can be said that Nishi-Hachioji is a very good environment for studying Japanese language. 西八王子にあるお寺「信松院」の桜です。このお寺は有名な武将である『武田信玄の娘』が開きました。普通のお寺とは違い、女性らしさを感じる装飾があり、とても華やかです。本校では1年に1回見学に行きます。見学の前に学生たちは授業でこの寺が建てられた悲恋の物語を学びます。学校の近くには歴史的な建物がたくさんあります。西八王子は日本語を学ぶ環境としてとても優れていると言えます。

Apr. 4, 2022
Decided to go back to Gyoda again this weekend. We had such a good time last time we went we decided we wanted to check out the cherry blossoms this spring. Managed to visit some really nice places. We originally wanted to use the rental bicycles that they have in front of the station but we got there past noon and all of them were taken unfortunately. Fortunately for us, it ended up getting a bit colder later on so it actually worked out. We got lucky as there was a really convenient sightseeing bus that rolled through the station to all of the major places in the city every 45 minutes or so. We checked out the cherry blossoms at Gyoda Castle and they had the Hanachozu (花手水, pots of flowers floating in water). We were able to see a few of these throughout the city which was nice. They also had traditional umbrellas on display in a few areas around the castle which was really pretty. After Gyoda Castle we visited the Sakitama Burial Mounds which had some really beautiful views of the cherry blossoms. There was also a flock of herons flying around the area but I wasn't able to get a very good photo of any of them. Luckily we got some great photos of the cherry blossoms and the main mound and had a really enjoyable time. We also stopped by Suijo Park and there were some food stalls in the area, but we got there when everything was just about closed so we only got to see a few of the vendors. We managed to get a really tasty lemonade and a latte though. Both tasted really good. Surprisingly there were a lot of cosplayers at the park. We probably saw like 20-30 people cosplaying using the bridges and cherry blossoms in the area. On the way back to the station we managed saw this river during the bus ride and so we backtracked a little bit after getting to the station (about 5 minutes walking) and got to enjoy some really phenomenal views of the cherry blossoms along the river. There were hardly any people there as well, surprisingly. Overall it was a really awesome time!