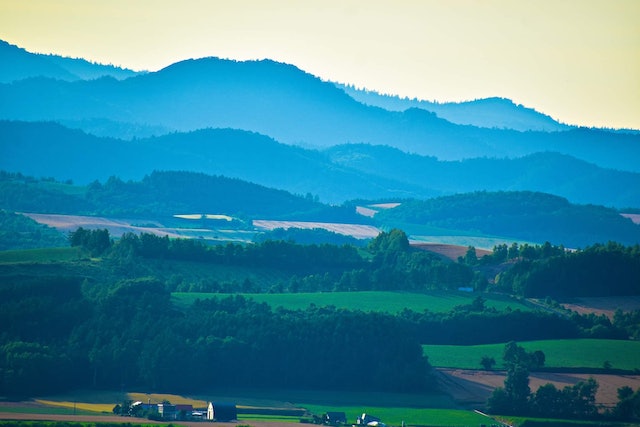 During the summer times the mountains looks so green with the fresh leafs. From the Hinode park in Hokkaido I got this very picturesque photo where a vast range of mountains can be seen. Additionally the patchwork fields creates the scenario more beautiful.

12 days ago
Samba is the traditional Brazilian dance and a cultural heritage of that country. Although in Tokyo there are not so many Brazilian but very fortunately there is a Samba carnival in Tokyo which is known as Asakusa Samba Carnival. The carnival is very colorful and full of joy and entertainment. Due to the corona pandemic last 2 years the carnival was cancelled and it seems this year also the carnival will be cancelled but in 2019 I was able to enjoy it. It was my 1st time to enjoy such a colorful and cheerful festival.

12 days ago
On the final day of our trip we were a bit tired but still wanted to see a few things and just casually enjoy our time. We ended up going to Marugame Castle as our first destination. It was really cool as it's one of the 12 castles in Japan that still has an original castle keep. The castle itself isn't very large, but the area surrounding it is. From the bottom of the castle the keep is quite small so it's hard to get a good photo of it, but we got a photo of it with one of the turrets along the moat wall which was cool. We reserved a rickshaw ride the previous night as well so when we got to the castle we did a little exploring and then we went on a guided tour around the lower area of the castle. The rickshaw guide was a really nice guy and quite funny as well. Apparently he was a comedian but he enjoyed doing this job as well. He told us a bunch of different things about the castle and it's construction while also telling some jokes occasionally. After the rickshaw tour we climbed our way up to the top of the castle and there were saw really amazing views waiting for us at the top. You could see the entire city almost. We also entered the castle keep, but it was relatively small. It was still nice to see the architecture on the inside but the stairs were a bit scary. They were incredibly steep and I was holding the handrails the entire time going up or down them. After checking out the castle we were pretty hungry and so we decided to get some lunch. Being Kagawa is the udon prefecture we went to an udon specialty restaurant. I haven't been to many udon restaurants so it was kind of a new experience for me. They had it set up kind of like a cafeteria and you go through and choose what you want and other toppings to go with your udon. I didn't see the trays for the extra toppings so I just ended up putting the karaage on top of my udon lol. I got niku udon and it tasted really good. The karaage was a nice touch as well. Not the usual tempura most people get but it went surprisingly well with the soup. After eating we headed towards Nakazu Banshoen, a garden with art exhibits as well. Before getting there we decided to stop by a Lupin-themed cafe though. It was a really tiny shop but we were able to cool off for a bit and relax which was nice since we were walking quite a bit. The garden was quite large and had a lot of different points of interest within it. The stepping stones were fun to cross and the row of torii gates was pretty cool as well. You can definitely take some nice photos with them. And that concludes our trip to Takamatsu! Overall it was a really fun trip and I definitely recommend it to anyone who hasn't been to Shikoku or Kagawa before. We didn't even get to do everything we were looking at but we still had a blast!

13 days ago
[English／日本] The other day, we had a summer festival as a school event. At that time, we went to Hiyoshi Hachioji Shrine, a 5-minute walk from the school. Girls wore yukata and boys wore happi of Okunitama Shrine. It was a very hot day, but the breeze through the shrine grounds was very pleasant. 先日、学校のイベントで夏祭りをしました。そのときに、学校から徒歩5分の「日吉八王子神社」へ行きました。女子は浴衣、男子は大國魂神社のはっぴを着ています。とても暑い日でしたが、境内を抜ける風がとても気持ちよかったです。

13 days ago
In Japan summer means the season of festivals. There are many festivals here and there. One such festival is Eisa dance festival of Shinjuku. Eisa dance is originated from Japan's tropical weather area, Okinawa. The whole festival is very enjoyable and exciting. Although the performance day was very hot (around 34 degree) but it was not reflecting on face of the performers. They are really very energetic. The rhythmic movements of all performer and also the drum beats makes the whole environment very charming and enjoyable.

13 days ago
On the second day of our trip we headed over to Shodoshima, one of the many islands in the Seto Inland Sea. The only way there is by ferry so we got some tickets for it and boarded the ship. It was a really nice ride as the weather was great on Sunday and it was warm out, but not too hot. Sitting on the upper deck was nice as well, as we got to view some of the other islands in the area and also got to see people fishing etc. Plus the breeze was really refreshing as well. When we arrived to the island we tried renting some bicycles but unfortunately they were all rented out. After that we tried to get a car, but they were all rented out too, so we decided to take the buses where we needed to go. It worked out fine though. The first spot we decided to go was Olive Park, but when we got to the bus stop where it was located there was a really nice beach so we decided to check it out and put our feet in the water to cool of. There were people swimming and wind surfing and there was a nice little snack shack with some tasty looking food. After hanging out on the beach for a bit we headed up to the park. There was a ton of people renting broomsticks to do the Kiki's Delivery Service photo and it was pretty funny to watch it. We thought about doing it but the brooms were like a 45 minute wait because there were so many people so we decided to pass on it. We also ate lunch at a restaurant inside the main building at the park. They had some really good food (photo #4) and a really tasty drink as well. I don't remember what it was, but I'm glad I got it. The view from the restaurant overlooked the area as well which was nice. After lunch we headed down towards where the windmill was and stopped at a small shrine on the way. The windmill area had a nice view as well and there were people trying to jump off rocks to get photos with it lol. After we finished up at the park we decided to head over to Angel Road. We looked at the hours when you could cross the sand bridge and we arrived early, but it seems like the hours were slightly off that day perhaps and we made it right at the perfect time. There was just a little bit of water left over the sand bridge so we were able to take our shoes off and cross. Unfortunately there were a bunch of really small rocks so it kind of hurt your feet but it wasn't too bad. We managed to make it across. Was able to take some decent photos as well. We also had some ice cream at a nearby shop. It tasted great! After we finished checking out Angel Road, we headed back to the ferry and and as we started to leave the port I said out loud "It smells like sesame oil doesn't it?" Well it turns out there was a sesame oil factory directly behind me so we had a bit of a laugh at that. Was a successful day!