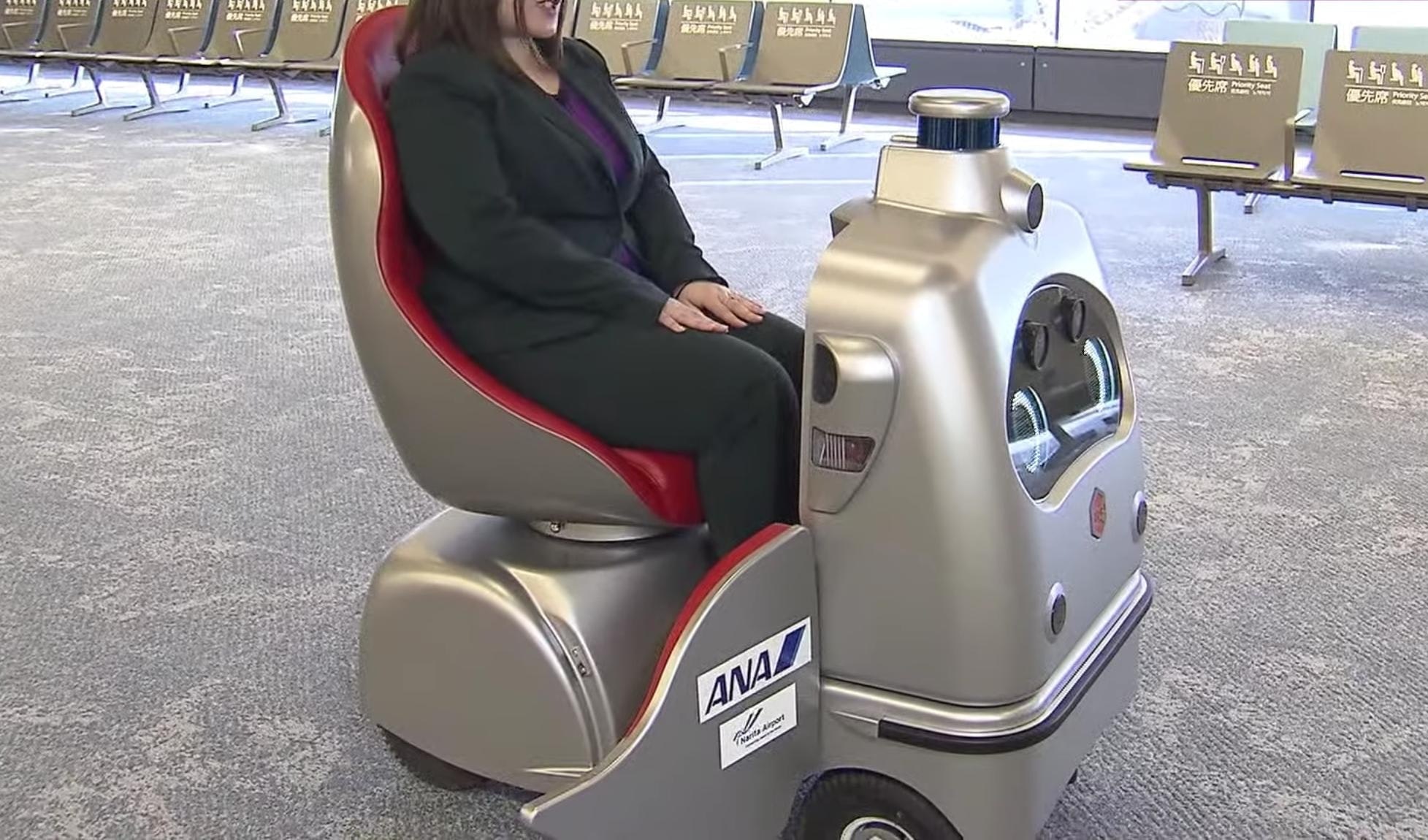 The Autonomous, Ultra-Lightweight Vehicle Driving Itself Around the Airport

This time, we introduce a news coverage video published by "FNN Prime Online," titled "Autonomous One-Man Ulv in Airport; Senior Citizens Can Travel With Ease" (空港に1人乗り自動運転モビリティ 高齢者も楽に移動), which talks about the small scooter called "RakuRo" that autonomously drives itself within the airport.

The autonomous scooter, RakuRo, is a ULV (Ultra-lightweight vehicle) that expertly navigates its way through the crowds at Narita International Airport.
You can see RakuRo operating in the video.
RakuRo is expected to be used by families with children, passengers with loads of baggage, senior citizens, and more.
If you hop on RakuRo and choose a destination on the tablet, the personal ULV will drive you to that location.

The In-Airport Driving of RakuRo

RakuRo travels slowly, with a maximum speed of 6km/h.
You can watch the scooter driving around with a passenger at 0:14 in the video.

It travels while avoiding obstacles by using its built-in camera and sensors to detect its surroundings. It will stop, and even take detours when necessary.
You can see the RakuRo stopping when there is a person in front of it at 1:16 in the video.
The sensors are based on autonomous mobility technology used in the development of self-driving vehicles, and are located in three locations: the upper front, the central face, and at the bottom.

In airports, where GPS is not available, the radar system, LiDAR, is used to detect obstacles around the vehicle and estimate its position by comparing it with a high-precision 3D map.
In order to create the 3D map in advance, they conducted a real-life experiment. This can be seen in the video.
The size of RakuRo is 65×110×120cm, and as you can see at 0:48 in the video, the seat on the autonomous vehicle is designed to rotate 90 degrees when entering the vehicle, making it easy for elderly people with weak legs and feet to use it.

According to Hiromasa Iwano, Manager of ZMP's Robolife Division, the developer of RakuRo, the features of RakuRo include facial expressions that allow it to smile and vocalize, allowing it to communicate with the people around it while moving.

In addition, when the number of foreign tourists increases and the airport staff is in short supply, RakuRo can take over the responsibility of guiding people to the airport.

Experiment for Practical Use of RakuRo by ANA and NAA

This video shows a demonstration of the practical application of the RakuRo system, conducted by NAA (Narita International Airport) and ANA (All Nippon Airways).
The "RakuRo" system, which is able to optimally navigate a large area of the airport, can be used to get to the boarding gate, and can also be used to pass through duty free shops and restaurants, all from a hand-held display.
RakuRo is attracting a lot of attention for its ability to get passengers where they need to go, with simple operations, according to their needs.
The display on RakuRo can be used to talk to other customers and to communicate with the surrounding people.

Hiromasa Iwano, the developer of RakuRo, says that although automated driving systems such as taxis have been developed, RakuRo, which travels at low speeds, has a lower hurdle to overcome, and hints at the possibility of commercialization.

What did you think about the new ULV, RakuRo, being implemented at airports? It's a vehicle of the future that will change how we use airports in the near future.

Airports used to be an inconvenient place for the elderly and families with children.
We await the day that airports are no longer a stressful, crowded environment, but rather, travel hubs that one can look forward to!