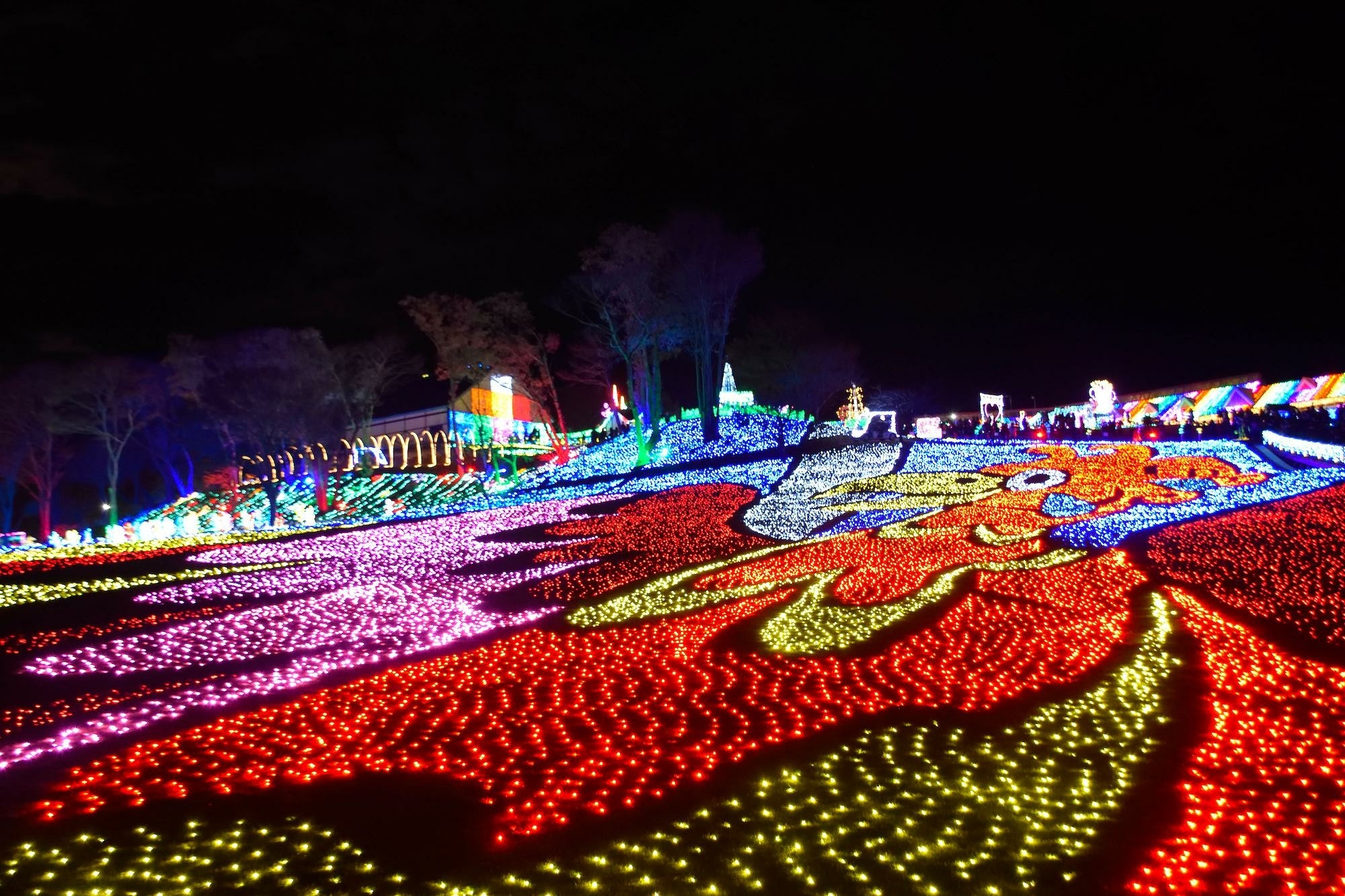 The Country Farm Tokyo German Village Winter Illumination has been recognized as one of the Top 3 Illuminations in Japan's Kanto Region, and this video shows the dazzling beauty of the spectacular event. Three million lights illuminate the vast park where the winter illumination is held. The video features views from the viewing platform, buildings decorated with glittering lights, and a long tunnel glowing in rainbow colors. Be sure to check it out!

Country Farm Tokyo German Village is located in the city of Sodegaura in Chiba Prefecture, located in Japan's Kanto region. The name "Tokyo" comes from the fact that the Tokyo Bay Aqua-line opened to traffic, connecting Tokyo to Sodegaura.
Country Farm Tokyo German Village is a theme park of flowers and greenery inspired by the German countryside. There are more than 20 types of paid attractions, such as mini golf, on the vast grounds. In addition, there's a free play area, a grassy park, a children's zoo, a flower viewing area, a forest where you can experience adventure, and a crop harvesting experience, making it a sightseeing spot where both children and adults can enjoy themselves. You can also come by car and park inside Country Farm Tokyo German Village, which is convenient, as you can park near attractions!

"Wan Wan Land" is an all-grass dog run. You can let your best friend run free in the spacious dog run. Be sure you understand the rules of the dog run so no problems arise during your visit.

At Flower Spot, visitors can enjoy a variety of colorful flowers in each of Japan's four seasons. In spring, guests can see a full field of moss phlox and baby blue eyes, in summer, cute green kochia, and in fall, kochia dyed red with the autumn season. It's a spot that is sure to make for some good photos, especially on Instagram!

Restaurants, canteens, and stores offer German-inspired dishes and sweets. At the restaurant in Marktplatz, you can also purchase German beer, German sausages, and other favorite foods and have a barbecue.

An annual winter event, the Country Farm Tokyo German Village Illumination was listed as one of the Top 3 Illuminations in Japan's Kanto Region from 2012 to 2018.

The large illumination features all sorts of colorful images displayed across the grounds of the park, which can be difficult to make out when viewed from up close. We recommend viewing it from the view point on a hill a short distance away to appreciate the full extent of the decorations. There is also a pay cart that moves slowly and automatically through the illumination. You can enjoy a relaxing 6-minute ride through the illuminated park.
[Video] 1:46 - The Spacious Illumination
[Video] 2:28 - Enjoying the Illumination via Cart

The Country Farm Tokyo German Village Illumination lights up at sunset. As the illumination period approaches, the park begins to become crowded with cars and sightseeing buses. Since the roads inside the park are one-way, we recommend that you enter the park early. Also, parking your car in the parking lot near the exit will make it easier to leave when you've finished enjoying the park.

The illumination is on a large site, and there's a lot of walking involved, so if you're bringing children, make sure to keep an eye on them so they don't get lost in the crowds.
Enjoy the crisp winter air and glowing lights at the Country Farm Tokyo German Village Illumination!

たまいゆき子（Yukiko Tamai）
Sometimes I suddenly feel the urge to try something new. Right now I'm trying my hand at being a wri
SUBSCRIBE