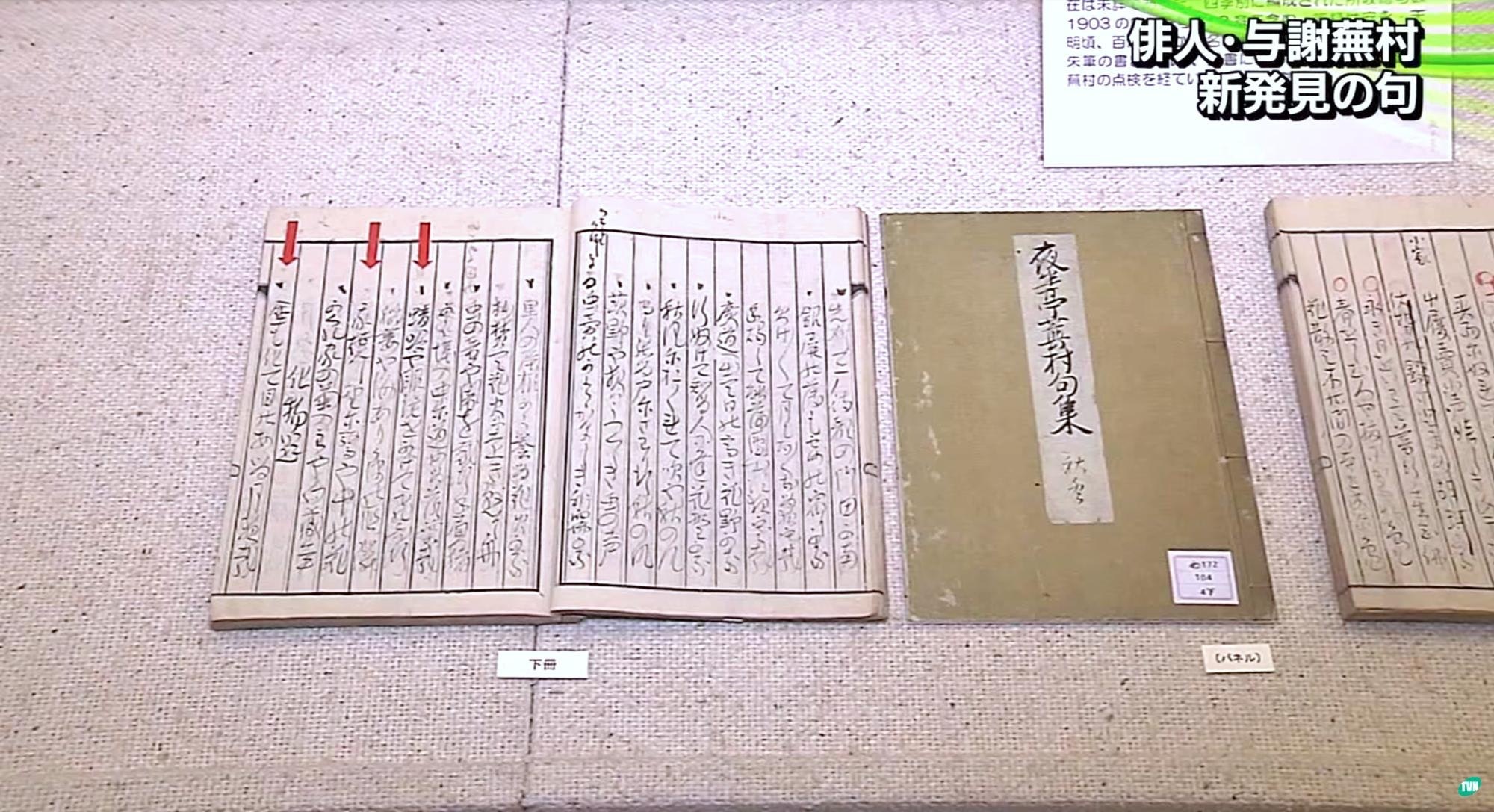 The Discovery of Yosa Buson's Haiku

"New Phrases of Yosa Buson（与謝蕪村の新発見の句）", produced by "Nara TV Channel", is a news video introducing the discovery of new haiku written by Yosa Buson, a haiku author, painter, and poet.

Along with Basho Matsuo and Issa Kobayashi, the Haiku poem by Yosa Buson, one of the three major Edo poets in Edo, was spotlighted at Tenri University's Tenri Library.
Currently, it is stored as a valuable document that is useful for research on Yosa Buson.
In this article, I would like to introduce you to Yosa Buson, and talk about the discovery of his new haiku.

In 2015, 300 years after the birth of Yosa Buson, 212 newly discovered haiku were added to Yosa Buson's collection of haiku.
A new haiku was discovered in a book called "Yahantei Buson Kushu," held by Tenri University's Library.
You can also see from the video that various media outlets have come to the news gathering for the press conference of "Shinshu Buson Kushu Buson Kukaikou" held at Tenri University's Library.
It can be seen from 0:14 in the video.

Among the newly discovered materials, there are traces of corrections and inspections by Yosa Buson, which is a very valuable research material.
You can see the actual haiku collection, and the traces with corrections from 0:26 in the video.
A memorial exhibition "Haijin Buson- In commemoration of the 300th anniversary of his birth" was also held at the Tenri University's Library.

Who Was Yosa Buson, the Famous Japanese Poet?

Yosa Buson is a master of Edo haiku, and is said to be the founder of the Edo Haiku Chukou.
His representative works include "Rape Blossoms and the Moon in the East and the Sun in the West" and "The Spring Hine Mosuno Tarino Tarikana".
His pseudonyms for haiku include "Saichou" and "Yahantei (Nisei)", and the pseudonyms he used for painting were "Shunsei" and "Shain".

In 1716, Yosa Buson (real name Taniguchi) was born in Kema Village, Higashinari-gun, Settsuno kuni.
At the age of 20, he studied haiku by studying with Hayano Hajin.
After that, he yearned for Basho Matsuo and traveled around the Tohoku region. After years of study, he blossomed at the ripe age of 40 years old.


Yosa Buson is famous as a poet, but he also worked as a painter, drawing haiga (pictures for haiku) for Basho Matsuo's works.
Some of his famous emaki (picture scrolls) include works such as "Okunohosomichi" and "Yashoku roudaizu".

Haiku is a short poems that sings of the seasons and nature, and is characterized by its five, seven, five structure.
Haiku has a rule that involves using a seasonal word in the poem. This is called a fixed season.
Like Waka and Renku (Haiku Renka), there are works that do not include seasonal words. These are called seasonless haiku.
Haiku is also referred to as "17 letters, 17 sounds, and 17 words".

Senryu, which resemble haiku, is expressed in the 5, 7, 5 structure like haiku, but it is characterized by its lack of seasonal words.
The good thing about Senryu is its high degree of freedom and use of light expressions.

Summary of the Discovery of Yosa Buson's Haiku

"Yosa Buson’s New Discovered Haiku Collection" produced by "Nara TV Channel" is a video that introduces the discovery of a new haiku by Yosa Buson.

It was showered with attention when it was first announced that haiku from a famous Edo period poet had been discovered.
If you're a history buff, or just love poetry, this is a must-see video! If you're interested, be sure to check it out.